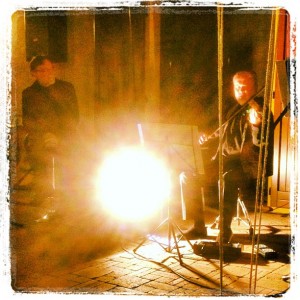 Jeremy has performed a number of spoken word shows, most often with violinist and all-round
super-looper Steve Bingham.

Their most popular show to date is Touchable Dreams, a feast of poetry and music celebrating love in all its many forms. They have performed Touchable Dreams in the Uk and in many countries around the world (including Bologna, Italy where the photograph above was taken).

They have  also collaborated on Bent and broken into a better shape: the magical storytelling of Charles Dickens – a show commissioned by the British Council.

Recently Jeremy has performed A Christmas Carol with the Bingham String Quartet. This is a special re-working of the classic tale, abridged by Thomas Allain and set to music by his brother Richard.